The Difference Between Redmond Real Salt, Celtic, and Himalayan Salt

The Difference Between Redmond Real Salt, Celtic, and Himalayan Salt

We’re going to do something today most companies don’t like to do: we’re going to say nice things about the competition.

No, that doesn’t mean we’re going to be kind to that bitter, chemically treated white table salt you still find in far too many kitchens, because if you understand the health benefits of Real Salt you already know that Real Salt and table salt aren’t really the same product.  But we are going to answer a question we hear a lot when people are considering their salt options: What’s the difference between Redmond Real Salt, and Celtic or Himalayan salt?

Here’s a handy chart that will show you some of the differences at a glance. 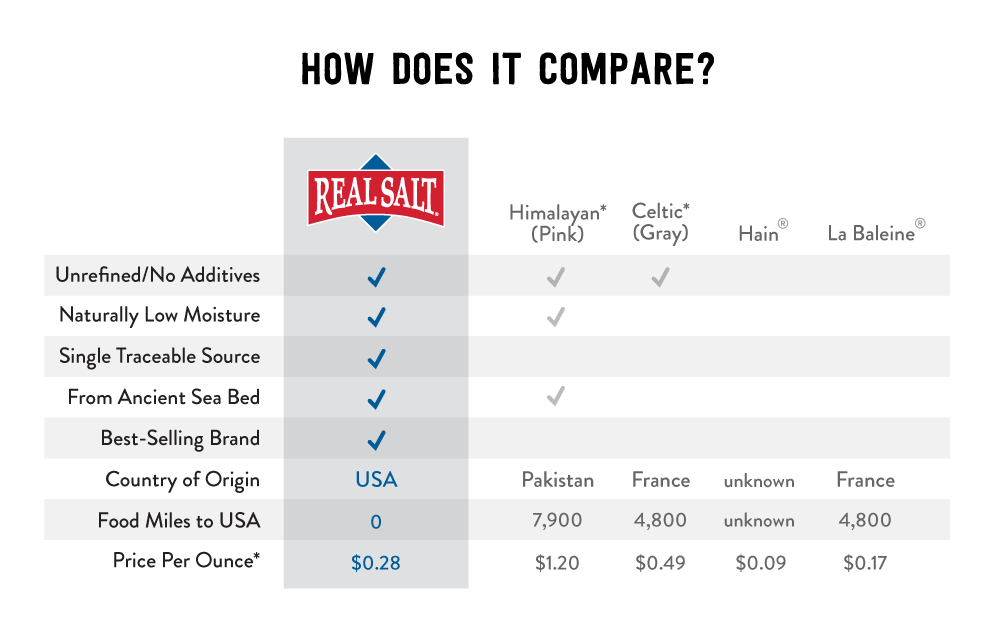 Real Salt is an all-natural, unrefined sea salt harvested from an ancient ocean. It’s full of natural minerals that make it healthy, delicious, and pink or red looking, and though we do hate to boast, we’re also the best-selling brand in America’s health food stores. Our salt deposit is in Redmond, Utah where our team enjoys award-winning work conditions and generous pay – and since we own and control the whole process you can be sure Real Salt comes to you through our world-class production facilities in its unrefined, mineral-rich, delicious state, exactly as nature intended.

Celtic Salt is a great salt harvested from the current ocean in France. They do a terrific job with their salt, harvesting it by hand and leaving it unprocessed so it contains those important trace minerals. Compared to Real Salt, the biggest difference is that the current ocean is exposed to many anthropogenic environmental issues that ancient seas never experienced – things like mercury, lead, plastic, petroleum toxins and other man-made chemicals. It's a very wet salt, which makes for some amazing texture and flavor combinations. We like the idea of salt that comes from an ancient sea, before man-made pollution was prevalent, but Celtic is a great option.

Like Real Salt, the Himalayan brands are harvested from an ancient salt deposit that would have been created long before there were any modern toxins. Geologically, the Himalayan deposit is very similar to Real Salt; they both have the full spectrum of minerals and both can be considered crystal salts. Tasted side by side, Real Salt is a bit sweeter, while Himalayan tends toward an earthy flavor.

The big difference between Real Salt and Himalayan is geography. Real Salt comes from the USA (Redmond, Utah), and the Himalayan deposits are in and around Khewra, Pakistan. There are a number of different mines supplying the Himalayan brands, and some have more modern standards than others. Himalayan salt has to travel more than 7,000 miles just to make it to America, with all the environmental impacts that come with that. Real Salt not only has to travel a shorter distance, but our operations in Redmond are powered by our two large solar fields, reducing our environmental impact even more.

Generally, Real Salt is half the cost (we’re so glad we don’t have to ship it from Pakistan!) and we know you can always trust the quality, processes, and labor policies that bring Real Salt to your kitchen.

Use this map to get an idea where three of the top unrefined sea salts come from. 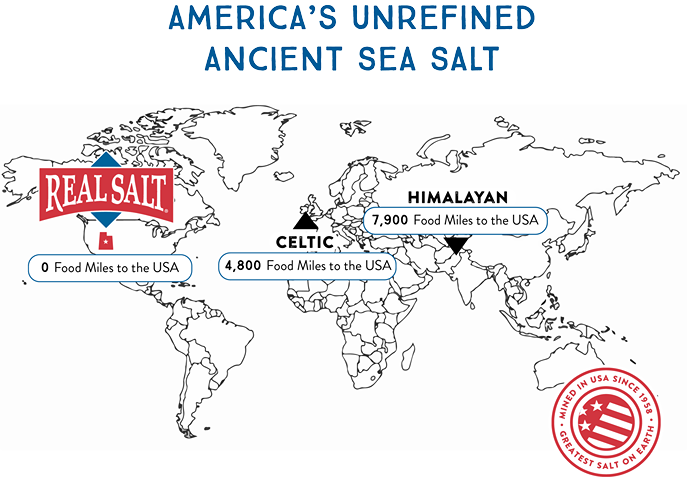 Still not sure which salt is right for you? If you’re closer to Pakistan than you are to Utah, we think a Himalayan salt could be your best choice. And you can always take the Real Salt taste test: First try Real Salt, then try whatever salt you used to use. The difference will amaze you!